If you start kate via a terminal session you will get the following errors: 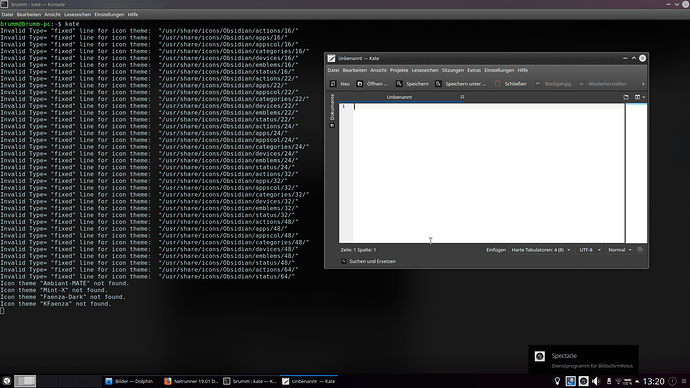 These are just warnings about the Icon Theme. You can ignore them.

Thank you. Firefox 65 is released with some security fixes, when is the release for netrunner available?

We don’t update firefox in our repos. You can get the new security fixed version from Debian Sid repository if you need this now.

Okay. So I have to wait until Firefox 65 comes into Debian testing. Thank you for quick answer.

Thats why I would suggest either switching to Firefox-ESR (that will give you Debian Buster security updates all the time) Or to use the Debian Sid Repo just for installing Firefox 65.

When I would use the Firefox ESR version, then I have first to remove the 64 version and then installing the ESR version?

No that is not necessary. Both can be installed in parallel if you want to.

When I want to use SID temporary only for the Firefox 65 version, how I have to do it correctly?

You activate the Debian SID sources.list

The last question: why you put into netrunner 19 the Firefox version 64 and not the ESR version, is it not more secure for your “customers”?

Which features of the 64 version I will loose (plasma integration etc.) when I would use the ESR version?

Plasma Integration should work still. You will loose some more modern HTML5 features and might notice a slightly lower speed in comparison.
I suggest you try it out for yourself and see if it makes a big impact on the websites you surf everyday or not.

Thank you very much for your clear answer.