Updating questions:
So far as I remember, the Netrunner Team is recommending the use of the (mintUpdate) Update Manager.

Because of concerns relating to system stability as described under Level Description in Preferences of the (mintUpdate) Update Manager, I unmarked both levels 4 and 5 (Safe & Visible).

I noticed after installing Netrunner 19.01 to my laptop and booting first into the system the Discover update displays itself prominently in the taskbar panel prompting updating the system.
3. Instead of the Discover update showing would it not be preferable that the (mintUpdate) Update Manager be moved into the foreground?

I just installed Netrunner 19.01 to my desktop using the selfsame source (USB-stick) as used for my laptop.
After updating and switching from Netrunner Black to Netrunner Desktop I noticed that some items in ‘Other Software’ are not the same. I don’t know the significance of theses differences.
3. What are/will be the consequences on updates for my desktop/laptop computers?
4. Is it okay that the Officially supported (main) checkbox is unmarked? 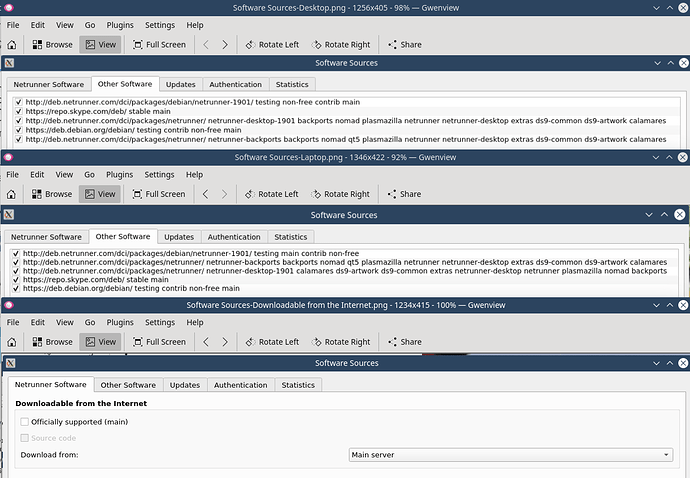 Softare%20Sources-Combo1236×857 179 KB
5. And would it not be worthwhile to consider to amend the Tips in the README tutorial and include advise relating to:
a) The preference using (mintupdate) Update Manager instead of Discover,
b) Enabling Continuous Updates, and
c) Recommended sequence of updating at first boot into Netrunner, i.e. enabling continuous updates before updating with Update Manager or the other way around.

Upgrading questions:
I am somewhat perplexed in relation to upgrades offered in the Synaptic Package Manager.
After pressing the ‘Reload’ and the ‘Mark All Upgrades’ buttons, Synaptic indicates a large number of available upgrades.

Id’be interested to know why unsafe and dangerous updates are being offered to download in the fist place risking breaking the operating system?

I wouldn’t call those updates unsafe or dangerous. MintUpdate uses a different wording maybe.
Basically the higher numbers indicate only that the risk of breaking is getting greater.
Personally I don’t had issues so far upgrading those packages aswell.

Discover always ships with this functionality and it cannot be removed from it without changing the whole code of discover.

I noticed after installing Netrunner 19.01 to my laptop and booting first into the system the Discover update displays itself prominently in the taskbar panel prompting updating the system.

This shouldn’t happen. We disabled it in the systemtray by default. If it is happening for you it is clearly a bug that needs fixing.

I don’t see a difference other than the sorting. It looks ok to me.
As you have Debian Testing and Netrunner Backports activated you will get regulary updates via Debian.

We’ll think about it.

Based on my conservative approach to updating the system, how should I go about upgrading the system without ‘breaking’ it?

Safest way would be using MintUpdate. If you want to be ultra safe don’t even check the level 4&5 updates.

Should all or some of these upgrades be implemented or should they be ignored or selectively applied; What is the determining factor applying these upgrades correctly?

In general the Debian world knows two update methods. One is called upgrade which is a normal update to one package. The other one is dist-upgrade as this one might install a new package as dependency or remove an old package because of a conflict with it.

By nature the first option is more safe than the other.

see above answer.
upgrade should give you the same as mintUpdate but also might include level 4
dist-upgrade installs all available updates for your system by also installing new packages previously not included and removing incompatible packages not needed anymore.

Hope that helps a bit.
In general you need to decide what to do. That is what the freedom of a linux desktop is all about

I wonder if people update e.g. everything all the time for all apps on Android?
If it works I personally dont update most stuff, unless i really want a specific update OR the app used stops working anymore.
Like on Android, people can make decisions though, unlike on Windows, where you most of the time have to endure the update procedures.

Thanks for helpful responses.

Computer program related files are known to be very pedantic

I don’t see a difference other than the sorting. It looks ok to me.

Yes, the line sorting is different as is the succession of wording in 2 line items viz:

In relation to my question 5c
Which mode of action do you suggest?
Thanks.